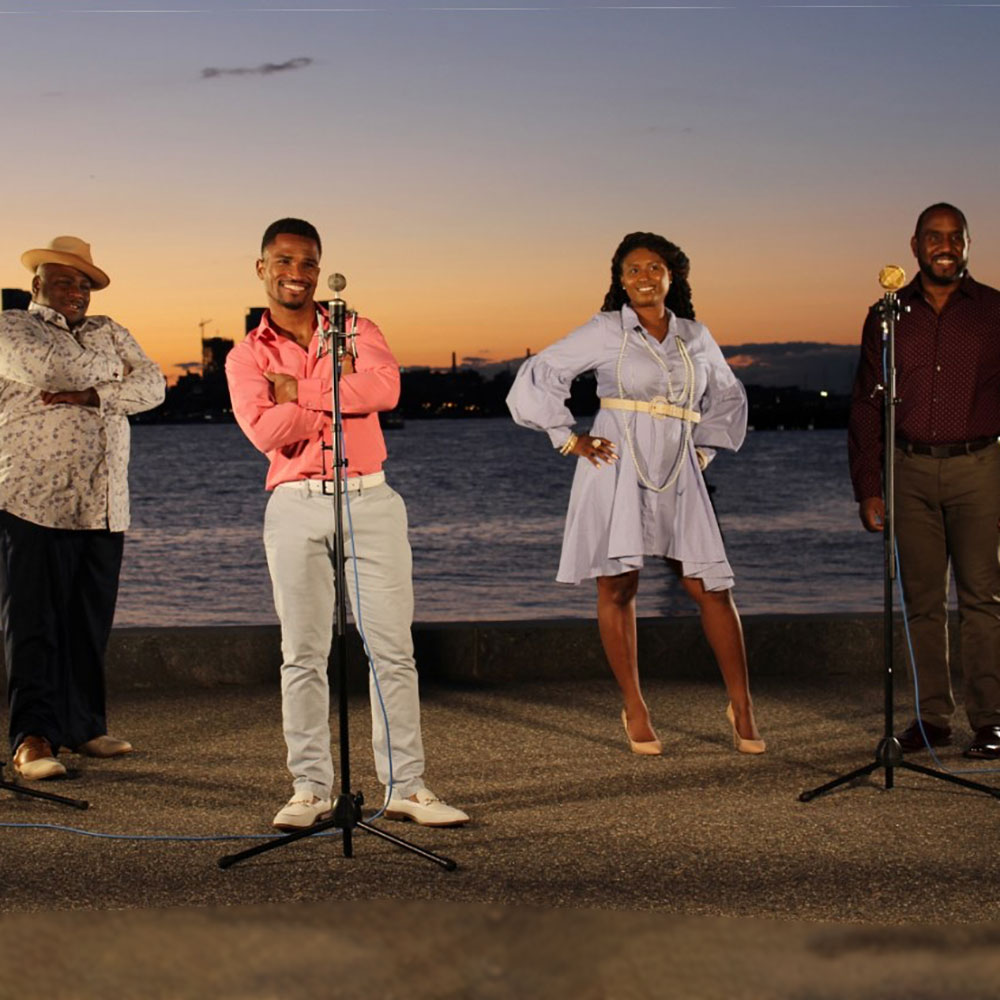 The world-famous vocal group, The Platters®, used one of the most picturesque views of the Boston skyline to record a music video for the Disney+ series “WandaVision.”

The four current members of the legendary group that was founded by Rock and Roll Hall of Fame artist Herb Reed in 1953 – Kingsley McIntosh, Lance Bernard Bryant, Leslie Grate, and Omar Ross – performed The Platters’ timeless hit, “Twilight Time” along the boardwalk outside the Hyatt Regency Boston Harbor Hotel in East Boston.

The Platters’ classic song is being featured by Marvel Studios in its six-episode Disney+, WandaVision series.

Frederick J. Balboni Jr., president, and CEO of Herb Reed Enterprises, and manager of The Platters, has overseen the resurgence of the group, whose many hits, including “The Great Pretender” and “Only You,” still resonate today around the world. At the video shoot in East Boston, Balboni said he was excited about the music video being recorded in East Boston and the new generation of fans that are being introduced to The Platters’ sound.

“Putting faces to The Platters’ name, the video re-release of Twilight Time affords millions of our fans here and abroad an opportunity to see the group today, and the re-release of the track provides a chance to download the track onto personal playlists,” said Balboni.

Balboni hypothesized that Marvel Studios selected “Twilight Zone” for WandaVision because of its classic sound. “And Sony just used the song for an international campaign for their PlayStation games,” he added.

Bringing forth the legacy of Herb Reed

Mr. Reed had an extraordinary career in the recording industry. He was inducted into the Rock and Roll Hall of Fame in 2012. Many credit the song “The Great Pretender” with helping The Platters become one of the first African-American groups to achieve international superstardom.

“We’re representing the legacy of Herb Reed and we’re bringing that legacy forward, which is very important to the African-American community, to music culture, and to women’s gender issues,” said Balboni.

For the first time in 45 years, The Platters will release a new album that will include new music and some of the classic hits.

“This is an exciting time and a third rebirth of the group and that very rarely happens,” said Balboni.

Balboni called the view [from the Hyatt Regency] of the Boston skyline “spectacular.” “The location does the fusion of what we’re doing, which is retro-contemporary,” said Balboni, “Twilight Time is a timeless song that we can make relevant today in a contemporary setting against the new Boston skyline,” said Balboni.

Praise for Balboni and enjoying Boston

The Platters enjoyed a tremendous reception from Hyatt Regency hotel guests and local residents who watched the video shoot unfold with such landmarks as the Custom House and John Hancock Tower in the background. The performers were congenial and accessible to fans and expressed humbly their feelings of proudness to be representing the incredible legacy of Herb Reed. Each vocalist seemed genuinely excited to be in Boston and working in coordination with Frederick Balboni.

“It [the Boston skyline] is absolutely beautiful and it’s wonderful to be a part of such an important part of music history and this resurgence of The Platters going into the new generation of a new market, so it’s extremely exciting and very gratifying,” said Lance Bernard Bryant, one of the lead vocalists who grew up in Rochester, N.Y. and studied classically at SUNY Fredonia. “I think this video is going to reintroduce the group to several people who are familiar with The Platters’ music and introduce them to a brand new generation of younger music lovers who relate to the same style of music and will continue to grow with our new evolution of the music. Our new song, “It’s My Time,” is getting a wonderful response from people young and old.”

Kingsley McIntosh, who is known widely as “Cousin Brian,” actually performed on the road with Herb Reed prior to his passing.

“It [performing on stage with Mr. Reed] was an experience of a lifetime in every way imaginable,” said McIntosh. “He was a genuine person. His spirit is always around us.”

McIntosh, who grew up in Lexington, N.C. “The barbecue capital of the world”), said Mr. Reed taught him “that no matter who we were, whether it was a million people or five people, he had a motto: “Give it your all every night like this [performance] is the best thing that can ever happen to you.”

About working in Boston on the video, McIntosh said, “Boston is fun until you get in traffic around 5 o’clock and everybody is blowing their horn at the guy with the North Carolina license plates,” he said. “But we have one of the most important jobs in the world and that’s making people feel good.”

Speaking about Balboni, the group’s dedicated manager, McIntosh offered, “Fred is the best. He’s a standup guy. He’s doing a great job for the group.”

Omar Ross is the newest member of The Platters. “It’s an honor to be with The Platters,” said Ross. “They have such a long history of great songs. I just feel honored to be a part of it. We’re a good team.”

Ross, who was born in Detroit, grew up in Florida and attended the Cincinnati Conservatory of Music, said he is enjoying his time in Boston. “Boston is growing on me. It’s a great city. I haven’t gotten to see too much because of COVID-19 but what I have seen I like.”

Leslie Grate, the stunning vocalist and native of South Carolina (“I’m a North Carolina fan, though”) said it was “amazing” to be performing with The Platters. “We’re a group that does everything together. Boston is wonderful. I love the water and scenery. I’m excited to be in Boston. We can’t wait to see everyone when we begin to tour again.”

Michael Larson, long-time music director for The Platters, said, “It was a pleasure working with Herb Reed. The greatest thing about Herb Reed was that he was a great storyteller. And there’s nothing like sitting next to him in airports and Herb telling stories about meeting the Queen of England when he was young. Any time we went into a new city, he would have five stories about the city because he had been everywhere. It was so much fun being with him. And it’s great to be with this group who is really dedicated to this music.”

Larson, who has been a Boston resident since 1997, said he met Frederick Balboni during his own piano-playing performance with his wife on vocals at the Encore Lounge in Boston’s Theater District.

“Fred used to come in and sing some songs and we got to know each other,” said Larson. “He knew I had a history with rock bands and groups and one day Fred brought Herb Reed with him to our show. We chatted and he liked what I did and I became music director,” said Larson. “It’s been a lot of fun.”

The Platters’ songs are digitally available on various streaming platforms, such as YouTube and Apple Music. You can listen to the album directly on our website here.

The Platters® – Many Voices ONE Name, is the official music website of the legendary rock & roll band that produced countless hits in the 50s and 60s. Today, The Platters(c) are still highly relevant to popular music culture, with timeless melodies loved by millions of fans across the globe and streams on Spotify alone surpassing three million every month. Prominent placements, such as the Sony Playstation Now ad campaigns, or the highly anticipated Marvel Studio / Disney Plus series WandaVision, are a testimony to the lasting success of one of Americas greatest romantic rock & roll bands. To experience The Platters® live, make sure to check out our tour schedule.