THE PLATTERS IN THE NEWS 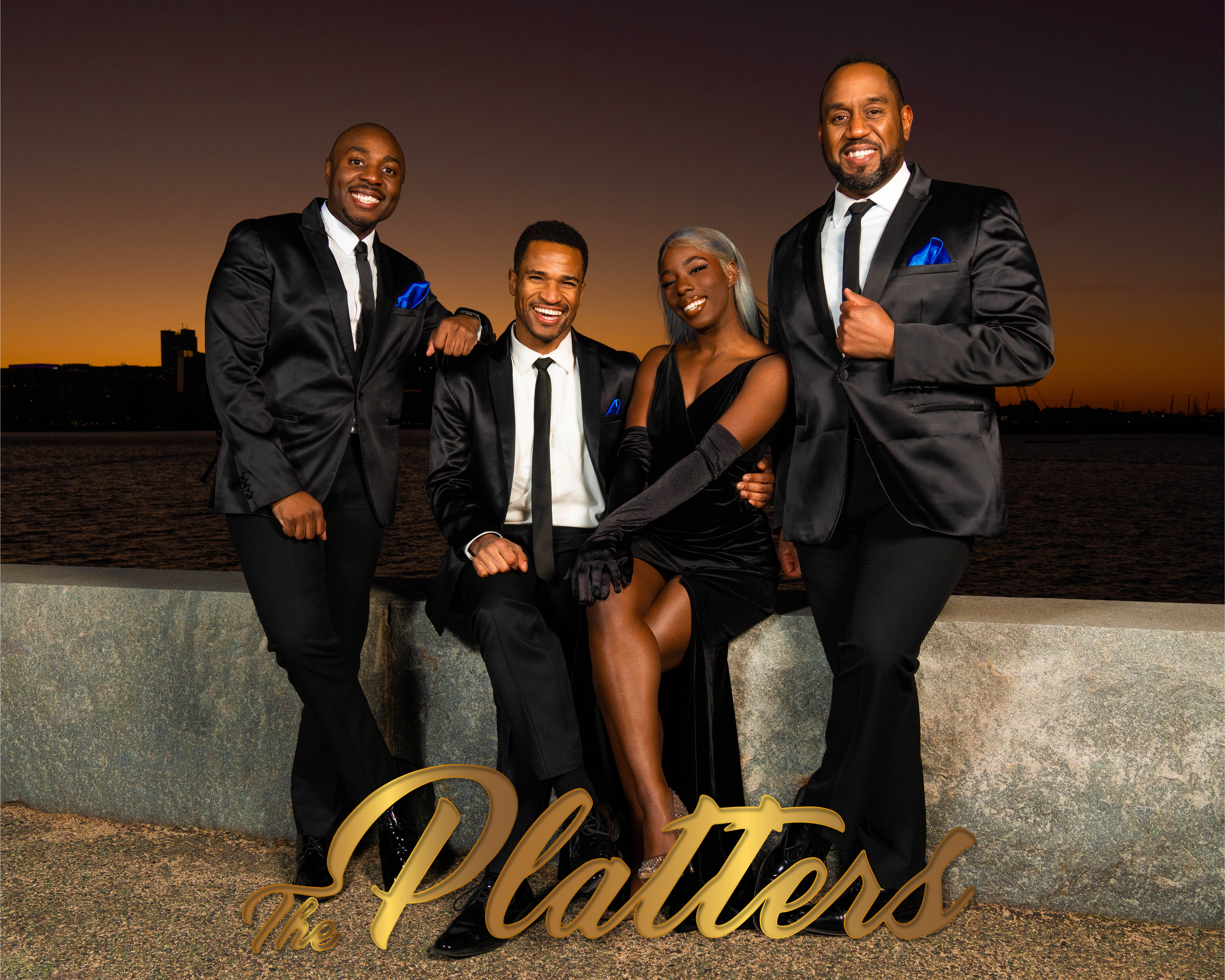 “One group, many voices,” is the motto of The Platters, which formed in the early 1950s and still is producing music to this day. Over the years, members have come and gone, adding to the group’s legacy and helping it evolve with each decade that passes.

There was one constant from the group’s inception that lasted 60 years. Founding member Herb Reed stayed with the group until his passing in 2012. Reed was the only original member to do so, and after a legal battle, was the sole owner of the group name, which is now operated by producer and manager Frederick J. Balboni, Jr.

“From the beginning of the group, when Herb Reed founded it in 1953, all the way until he died in 2012, Herb was the only consistent and original member of the group,” Balboni said. “There have been many people who joined The Platters throughout the years. That’s why it’s ‘many voices, one name.’ But the only one consistent person, and the person who really formed the legacy of The Platters, was Herb Reed. And he never really got his due for that. People tried to steal the name and we had to go through multiple federal courts and finally it was ruled that Herb was the superior markholder and had all of the rights to the name ‘The Platters.’”

A common misconception is that The Platters solely refers to the 1950s group, but in reality, the band has remained active all these years with multiple members coming and going for the entire tenure, so The Platters of today are just as much a part of the group.

“People think the original Platters was Zola Taylor, Tony Williams — but they all were with the group for very finite periods of time,” Balboni said. “In fact Tony Williams was with the group from ‘55 and did ‘Only You,’ until ‘59. He left the group in 1959, and that’s before “Harbor Lights” was even released. So the makeup of the group has always changed. It’s always been many voices, one name, except for Herb Reed, which is the loudest voice, if you will. He always was the president of the group from the beginning until his end. And now we continue on that legacy, so this is the official continuation. We just keep doing what The Platters have done the whole time — we keep evolving.”

Bryant has been with the group since 2012, joining shortly after Reed’s passing.

“I never imagined that I would be a part of the Platters,” Bryant said. “I was living in New York at the time and I had just finished a production with Cirque du Soleil in Macau, China. The show had closed so I wasn’t sure what I would be doing next so I was really looking forward to audition for anything. I was extremely honored to have the opportunity to join such an amazing group that has created such a wonderful mark on music history.”

Bryant joined at a poignant time for the group, which was ready to evolve into a more contemporary sound to appeal to younger audiences, while staying true to The Platters classic feel.

“It’s a huge honor to be a part of a well-established history, but even more so to be at a point in its journey where we’re able to push the story forward and reintroduce the brand to our already established fan base and bring about a younger and newer fan base into our fold through the new music that we’re able to produce,” Bryant said. “It’s really exciting because the themes for our music are eternal. There are themes of love and romance and struggle, and that’s something that people relate to at any age in any era and it will never die. The part that I love most about it is that our music is easy for people to understand and it evokes a memory that they can share. When we’re performing I can look out in the audience and you can see sometimes two, three generations all enjoying a song at the same time.”

Good music simply lasts, and pops up over and over throughout the years as new audiences discover it for the first time.

“The cool part about it is to see how the classic hits from our group are still able to inspire artists in this day in age. For instance we just had one of our hits, ‘Twilight Time,’ prominently featured in a Playstation Now commercial, and when you look through the comment thread, people would say, ‘Oh that’s a really cool song. Who does that? Where is that from?’ They think it’s a new group.”

The Platters music has been featured in many current pop culture pieces, including a Marvel series.

“They used ‘Twilight Time’ to launch the ‘WandaVision’ series through the trailer. It was a collaboration between Disney+ and Marvel Studios. In fact, because of that, the Platters are kind of now in the Marvel cinematic universe, which I guess makes them musical superheroes!” Balboni laughed.

The group’s popularity can be attributed to the timeless music, of course, but also to the host of revolving band members who have brought new life to the band while sticking to the classic “blueprint.” Balboni makes sure each new talent that joins the group has the right sound, yet will encourage further growth as well.

“There was a blueprint that The Platters kind of had for their unique sound back in the day,” Balboni said. “It was kind of known as the Tin Pan Alley sound, which back then was kind of groundbreaking. It’s a hybrid between R&B and rock and roll. So what we do is we try to maintain the harmonization of the group, coming through with that R&B and rock and roll hybrid. So we keep to the original blueprint of the sound of the group, but we contemporize it as we create new music.”

The current lineup is recording an album to be released next year, which will be the first new music from The Platters in 50 years.

“We actually have a new album coming out in 2022, which we’re really excited about, that has brand new original music that’s kind of founded in that sound, however it’s contemporary, so it will appeal to cross-generational audiences,” Balboni said. “We tested one of the songs, called ‘It’s My Time.’ We played it for the past three years internationally and domestically in our shows. Nobody had ever heard it but it was getting great response. It was getting a response from the younger people there, all the way up to people who are well over 80. It kind of has that rock flavor with the R&B tone around it. It’s a very uplifting and vibrant kind of sound that maintains the integrity of the group and then brings it contemporary.”

Laughlin audiences get the chance to see the current group when The Platters — Very Merry Christmas Show returns to the Riverside Resort at 7 p.m. Wednesday-Sunday, Dec. 15-19.

“They can expect to hear a lot of their favorites and we’re going to share some of our favorite holiday hits, so it’s going to be a really good time,” Bryant said. “We’re looking forward to seeing all of our fans out there — we love coming to Laughlin.”

Come to the show and feel like you’re a guest at The Platters’ Christmas party.

“The way I envision it is that they’re having a Christmas party and everybody’s at it,” Balboni said. “The audience are the guests and it’s truly a fun experience. Back in the day they use to have television specials where the set would be like a family setting and everybody would be singing Christmas songs and gather around the tree. This is a contemporary version of that, so it balances that retro/contemporary feel.”

The Platters’ songs are digitally available on various streaming platforms, such as YouTube and Apple Music. You can listen to the album directly on our website here.

The Platters® – Many Voices ONE Name, is the official music website of the legendary rock & roll band that produced countless hits in the 50s and 60s. Today, The Platters(c) are still highly relevant to popular music culture, with timeless melodies loved by millions of fans across the globe and streams on Spotify alone surpassing three million every month. Prominent placements, such as the Sony Playstation Now ad campaigns, or the highly anticipated Marvel Studio / Disney Plus series WandaVision, are a testimony to the lasting success of one of Americas greatest romantic rock & roll bands. To experience The Platters® live, make sure to check out our tour schedule.